The aces.pl website uses cookies to make it easier for Internet users to use our websites and for statistical purposes. If you are not blocking these files, you agree to their use and saving in the memory of your computer or other device. Remember that you can change your browser settings yourself to block the saving of cookies.
Cookies are used to personalize advertisements. Please see the information: https://policies.google.com/technologies/partner-sites
More information can be found in Privacy Policy .

What is biogas and what is its composition? 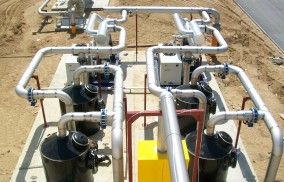 Why to remove hydrogen sulfide from biogas?

Hydrogen sulfide (H2S) is small non-organic compound that everyone associates with the smell of rotten eggs. Apart from unpleasant smell, it may also cause corrosion. Corroded parts of turbines and motors in the biogas station may break down, and the stoppages needed for repair works would generate loses in energy production and loses relating to the cost of repairing expensive equipment. That is why, all producers of biogas combustion equipment define upper limit of hydrogen sulfide content.
Due to the way of biogas generation, the hydrogen sulfide content is often higher than permissible. The simplest and most effective method to reduce hydrogen sulfide amount is using active carbons for the purpose. Thus we offer you products of Sorbotech GERS line.

Why siloxanes are unwanted in biogas?

Siloxanes are organosilicon compounds used at mass scale in cosmetic, food or motor industry. For that reason they are mainly encountered in dump site gas and biogas from water treatment plants. During biogas combustion in high temperatures, silicon dioxide (SiO2) or silicates (SixOy) are generated, which deposit on the parts of motors and turbines, which saying simply may jam these element. That is why, it is required to remove these compounds from biogas. Due to they structure and properties, siloxans are perfectly absorbed by active carbons such as Sorbotech GE.

Aromatic compounds – why to remember about them?

Aromatic compounds, after called VOC, are present in the company of siloxanes. Their combustion does not create a risk of corrosion or motor jamming. So, why it is important to determine VOC content in examined biogas? Volatile Organic Compounds compete with siloxanes for the room in pores in active carbon. It means that they saturate the active carbon thus accelerating the moment of active carbon replacement in a filter.

To remove all mentioned contaminants it is required to use technology that is efficient, easy to use and economical. All these features are met by the systems that are based on active carbon. Specially prepared carbons in Sorbotech GERS and Sorbotech GE series allow efficient removal of hydrogen sulfide and siloxanes. To fully use sorption capacities of Sorbotech carbons, we suggest application of suitable filter fromSorbofil GPE series. We invite you to contact us to select solution adapted to your needs.